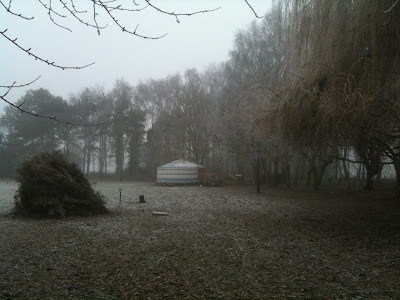 This week I've tried an alternative to loading up the fire before hitting the sack, now the fire is given a bowl of coal and a couple of pallet chunks about an hour before bedtime, that way the temperature has peaked and is on a gradual decline by bedtime. The upside is that the 3am sweatfest whereby the front door has to be opened to let the heat out is now over. The downside is that the temperature inside the yurt drops to about 6c by the morning. Now that sounds a bit on the chilly side, but it's not so cold as to give you a numb nose or cause any obvious discomfort, it's just a bit fresh and to be honest, once the duvet releases it's python-like hold, you're pretty much wide awake in .001 seconds. Although the compressed woodchip logs performed very well indeed, they still proved to be a little on the pricey side, so for now the yurt is heated using hardwood offcuts from a local beehive maker, much cheaper and it's nice to support people who care for bees, bees are nice.

The butane tank was swapped for propane this weekend, butane being the poor winter performer and propane being good for temperatures down to -30 or something. This means that the menu at cafe yurt has now grown from things that can be roasted (which was starting to get a bit tedious), into things that can be boiled like pasta, noodles, peas, tea, coffee and so on. In addition to that, it serves as a handy source of instant heat until the woodburner is warmed up nicely.

As a footnote to anyone planning on using a yurt at weekends though winter, bring your own water from home! mine was frozen solid from a week of sub-zero temperatures, there's a bodywarmer over the container now, but whether it can fend off the expected -6c this week is to be confirmed. Unfortunately it's now too late to deepen the cool box hole outside to below the frost line, it's frozen solid, meh.
Posted by Zanx at 10:18 1 comment:

I've Got the Flue

Saturday was flue extension day, various bits were sawn off new spiral duct, the crown cover was untied and the flue was disconnected from the fire and with a push-tilt, cleared the crown and flopped onto the roof of the (dust sheeted) yurt. The filth that was sitting in the flue was spectacular, oily black soot, just longing to find a pristine white shirt or something really expensive to soil. All in there must have been a good ice cream container full. So, long story short everything was stuck together with rivets and hoisted back into position, whereupon it was discovered to have developed a bizarre ability to look crooked from every angle. No matter.

The effect of the flue extension on the woodburner has been a bit odd, getting a fire going is a little harder than previously, and to stop it going into full on furnace mode, the flue damper needs closing off. In addition to this, the nasty stick goo that was previously lining the inside of the flue is now melting and seeping between the joins on the spiral. It's not all bad though, now that the damper can be closed without smoke leaking from every gap in the fire, the fuel inside is burnt more slowly and completely, logs are lasting twice as long.

Conclusion: There is an optimum length for flues, a meeting point between maximum draw and minimum restriction. Obviously I need to know what it is!!!
Posted by Zanx at 11:07 No comments:

Ok so not strictly speaking, but I was getting a bit sick of waking up at 2am in order to open the door to let heat out of the yurt in order to breathe again, sooooo, being a bit of a Maplins nerd, I popped in and purchased a thermostat kit and a silent PC fan, and the result is what you see in the video. The idea is that when it gets above a pre-set temperature, the fan (which will be mounted in the perspex window to one side of the door) kicks in and introduces cool air into the yurt. Once it gets comfortably cool again, the fan cuts out, leaving the yurt at a nice temperature again. Clever eh?