That's how cold it was Saturday night, well more to the point it was -6c OUTSIDE, inside it was anywhere between 20c and 37c. The lack of a proper length flue is making the loading of the woodburner a bit of a chore, every time the door is opened, smoke pours into the yurt and I have to dump the wood or coal into it and slam the door shut. Usually this is more inconvenient than unpleasant, but with the newly purchased cheapo house coal, the smoke is actually rather nasty. Needless to say, until the flue is extended and has a better draw on it, the house coal will stay in it's bag. The Taybrite smokes much less, well it is classified as smokeless so hardly surprising. The flue extension will be taking primo, number 1 precedence over everything next weekend, it's the one thing that is proving to be rather pesky and unpleasant.

Sunday morning was rather special, we had about 4 inches of snow outside :o)

Problem is that the snow now makes the canvas cover look particularly grubby because of the soot and smoke that the too short flue has deposited on the roof. Look and learn kiddies, if you have a yurt, get a good long flue on it. A standard canvas cleaner should get most of the grot off, that will be done (assuming temperatures go above freezing) once the flue is sorted, no point doing it before. 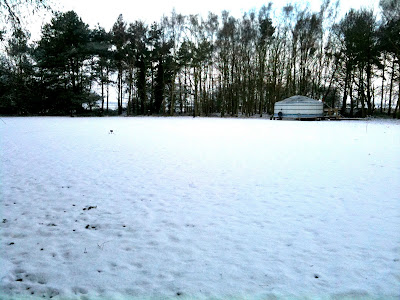 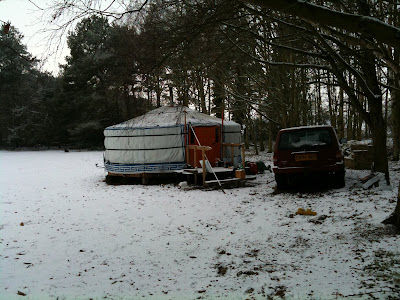 It's the chestnut season n'est pas? so I thought it would be nice to buy a bag from the local chestnut shop and try them in the woodburner oven. So far so good. In they go while I toddle off and help a friend with some screeding. Half an hour later the oven looks like a chestnut apocalypse, not a single chestnut survived, they looked like each one had been seeded by Alien and exploded violently before spraying the inside of the oven with it's mushy guts. The smoke filled the yurt from crown to floor and didn't smell very nice at all. Still, all it took was a good clean out of the oven, a quick hoover and a fistful of joss sticks and it was acceptable, if a not entirely pristinely fragranced place to be.

Maybe chestnuts are roasted within the confines of iron roasters for a reason, maybe for the same reason that popcorn is best cooked in a pan with a lid and not thrown into a chip pan full of boiling oil (don't ask).
Posted by Zanx at 09:52 2 comments:

For anyone who may be interested, here are my thoughts on the three types of heating fuel I'm using at the moment.

1) Old pallets.
Two large pallet sized boxes of these (chopped up into handy sized bits) cost me £30 locally and have proven to be essential for getting things started on a Friday night when it's freezing cold. They have the advantage of lighting up very easily and providing a shedload of heat in very little time. Unfortunately that is also their weakness, their fast and very hot burn makes them unsuitable for use through the day or night, but I wouldn't be without a big pile of them next to the fire.

2) "Seasoned" logs.
Note "Seasoned" logs, mainly because different people have different opinions on whether a log is ready for burning or not. Three large builders bags of big chunky "seasoned" logs were purchased locally for £140. In retrospect this may have been a little steep, mostly this was due to me not knowing the difference between a one tonne builders bag full of logs, and one tonne of logs. Many logs are delivered in those big cubic hessian bags that did indeed hold one tonne of SAND at some point, this does not mean that "tonne bags" of logs weigh one tonne. My mistake.
It transpired that despite there not being the classic signs of a well seasoned log, light weight, cracks radiating from the centre etc, that they do burn rather well, the split logs being fine to burn on their own once the coal has faded, and the larger logs do perfectly well when combined with split logs or on a bed of coal. They do need more air than coal so the bottom vent is cracked open a tad to help them along. One good thing is that the logs and pallets leave very little in the way of ash, the combustion is almost total.

3) Coal.
The least environmentally sound of all three fuels is annoyingly, the one that is most coveted, predominantly because it's the coal that keeps me from freezing solid through the night and is responsible for keeping things going till morning. I don't feel overly guilty about it's use though, a bag of Taybrite will last three weekends, possibly more if logs are used through the day and for cooking. Down side is that even though it lights quite easily, it takes a fair while to release it's glowy goodness so it's off the list of quick hit fuels. Maybe the cheaper house coal in little nuggets will prove a little more willing to heat up faster. As the owner of the Tyrell Corporation said, "The light that burns twice as bright, burns half as long Roy..." so like the logs and pallets, the coal has an essential part to play in the well regulated heating of my yurt. Coal does tend to leave rather a lot of ash though, can't be helped and I suspect it's the ash covering that keeps the little beauties glowing till morning, and I can't complain about that.

I'll be giving compressed waste wood briquettes a go in the near future, but reports suggest a fast burn with high heat output, not really something suited to the situation. Time will tell.
Posted by Zanx at 10:53 2 comments:

Ok, now the real test of the softie southerner office worker, winter! Last week was about 2c outside, positively tropical if you happen to be Mongolian, but a tad nippy for an Essex lad. Nevertheless, the yurt did a cracking job of keeping the heat in, the fire was fed a diet of wood lumps and Taybrite coal to keep things going though the day and performed beautifully.
The morning routine is to contemplate leaving the haven of the duvet for about 20 minutes, followed by a graceful commando roll over to the log basket, grab a log, poke the stove, chuck the log on and retreat to the duvet again in one fell swoop. So far the fire hasn't failed to come back to life yet, something I am very pleased with indeed.

All is not entirely perfect though, the spiral ducting that has been used as a chimney is doing well enough, but the little top hat and grille that stops the rain and small mammals getting in is starting to clog with soot and needs clearing every weekend. I intend to fit a longer flue to increase the amount of draw, and also cut away some of the grille in the top hat, it's not really needed. This time the silicon flue held out fine, the knack being to totally ignore the instructions and do what you think is correct, a concept most men will not have any problems with at all.

Nosh, mmmmm, yurt fare so far has been lovely jacket spuds, baguette pizza and an interesting stew consisting of sprouts, swede, potato and carrot. I ate most of it, the chickens had the rest.
The practicialities of washing up plates and the like are still something to be dealt with, at the moment it's a case of using my friend's kitchen sink to do the plates, for which I am grateful. One option would be to use the alsations to clear the bulk of the plate grot, then follow with a quick rinse in the stream. Kidding!


I'm still working out the correct place for everything, what's needed, what's superflous, what's just sitting there and never used and what's become indispensible. One most excellent feature has been the addition of a rain diverter just above the doorframe. Most houses will have one of these, but the yurt didn't have one, which meant that every time it rained, water settled on the top of the door and dribbled onto my head when it was opened. The diverter now makes the water drip clear of the door, thus keeping my wipe clean bonce, dry.

I made a short vid of the Friday ritual of getting some heat into the yurt, a ritual which will no doubt become a little more frantic as the temperature drops below zero, (this weekend is due to drop to -3) in all honesty, I'm quite looking forward to it, not as much as waking up to find it's been snowing though, that will be a special moment :o).