You know how it is, you wake up one day, check your emails, casually browse the internet and decide that you NEED a yurt. So I bought one. Right, that's the reason out of the way, now for the interesting part.

I bought my yurt from http://www.yurtsdirect.com/ , it's a 16 footer in orange with lovely windowed doors and beautifully decorated woodwork. I must stress that it's not up yet, I started the raised base a couple of months before winter and it's been on hold since. 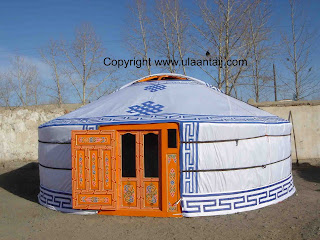 Just for the record, this ^ is the yurt I bought, same colour, same size. 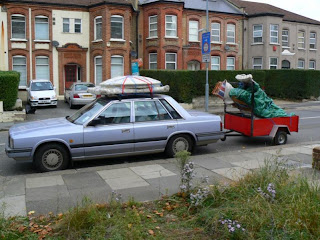 The Base.
I wanted a raised base because the land it's on is a little boggy sometimes and a space under the floor would provide a handy storage area for wood and the like. It's on 9 piles made from a single ex British Telecom telegraph pole that I bought from a very helpful and intersting chap in Lincoln. The reason I went with a telegraph pole is that a) It was £30. and b) They are dripping in creosote, right to the middle, and will withstand many years of being half buried.
It's actually not that easy to position 9 poles, in the ground, an equal distance away from each other and the centre pole AND have them all level, but after a day of messing around and much confusion, they were all whacked into place and the gaps round them filled with earth. That was it for about 2 months while it rained, and rained, and rained. The poles look like they are leaning out, it's just an illusion, no really, they're fine.

Here is the discussion with the UK's top mathematicians that was needed in order to discover the secret angle hidden in the outrigger posts.

It's worth pointing out that Mongolians would probably have a cow if they saw me digging great big holes in mother earth for the piles to go in, they have a great deal more respect for the planet than many (myself included), but they live on the permafrost of Mongolia, not the swamps of East Anglia. My apologies to any outraged Mongolians, I'm not a bad person really. 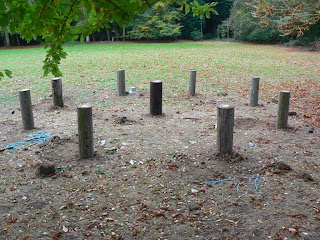 While it was raining, I manged to pick up a bargain in the joist department, all the 9x2 needed for the base for £100. I forget how many it was, it was enough anyway. Getting the joists all sorted took a few weekends. Luckily help was at hand in the form of a friend who has been in the quality building trade for years, otherwise I'd still be staring at 9 lumps of telegraph pole and a spade.
Main joists were put down, outriggers bolted on, many many noggins screwed in place and we now have what must be the most solid yurt base in the world. 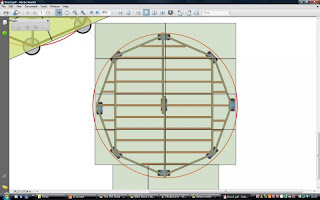 This is a plan of the base, the circle (red) is 16ft (to scale) and each oblong represents a 2440mm by 1220mm sheet of plywood, the noggins are not in this drawing, it was only later that my friend suggested they would be needed. I found it useful to plan how much I'd need to cover the floor before the pine planks go on the floor. It might not even need plywood because the spans on the joists are so small, the 12mm pine planks might be on their own, just screwed in. Time will tell I guess.

And that's as far as we have got. Hopefully with the improving weather, the base will be finished this week and MAYBE the yurt can go up. Might have to make a few calls to get some friends in though, it's a big job for a first timer.
Posted by Zanx at 11:00 No comments: