I bought six of these from the £1 shop, they are the same metallic silver cellophane sheets that they wrap round marathon runners or people who are losing heat.  Apparently they reflect infra red radiation and are good retainers of heat, so on that principle they should do well as a new ceiling liner for the yurt.  Took about half an hour, but I now have what looks like a radio telescope for a ceiling.  The crinkling sound will take a little getting used to, but it's no worse than being kept awake by something akin to an ostrich stomping around on the roof.

So far, the combination of additional insulation and the reflective sheet is pretty impressive, right now it's 14c outside and 18.8c inside with the only heat coming from me and the 12v fridge.  I'm hoping to be able to get away with less coal and wood burning this year and lean more towards more controllable forms of heating like an oil filled radiator or fan heater.

Also, the yurt has a new veranda, I fell through the old one and nearly broke my leg.  This time it's been done with decent wood from a pallet place in Wisbech run by a lovely chap from Holland who also sells timber.  It's been treated with epoxy varnish so should last better than the bare wood that was used previously.  To be fair, the old steps didn't do too badly, they've been there from the beginning of the build.
Posted by Zanx at 17:07 No comments:

Ditching the Canvas, Adding a Cosy Jacket for Winter.

Looks like a good weekend so I've pulled my finger out and got stuck in to the thing I have been putting off for some time now.  Initially today's project was to get under the felt, put some additional insulation in the form of carpet underlay, and put it all back together again.  It all went a bit wrong when the outer cover was removed and I found this... 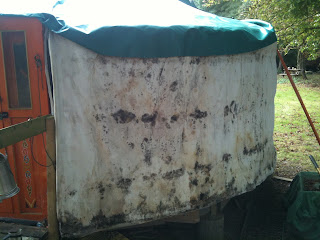 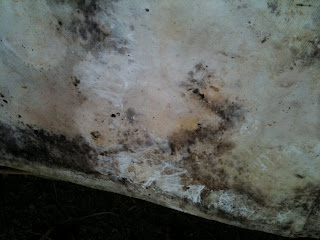 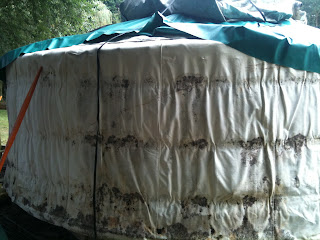 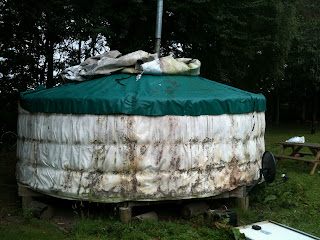 Presumably this is as a result of the wettest year in the UK since the Stone Age, followed by very few opportunities to dry out between showers.  The canvas wall that is intended to keep the yurt waterproof had rotted at the bottom where it has been perpetually wet, and there are some fungal stains on the felt. 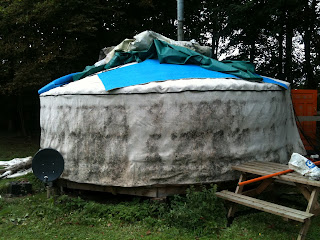 Fortunately there are still a few layers between the mould and the inside of the yurt so I don't think any harm has been done.  The picture above also shows the first of three sheets of underlay to be placed on the roof, the following picture is of the additional wall insulation (held on initially with gaffa tape, this features heavily in the upgrade). 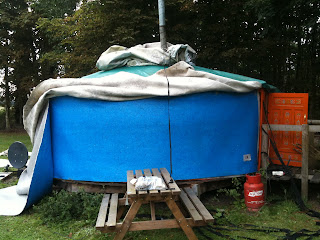 Once that was out the way, it was time to think about replacing the rotted canvas wall.  I decided on damp proof membrane from B&Q, a single 15x4m roll was more than enough, cost about £40.  I sliced off a strip 150cm wide and worked my way round with a roll of gaffa tape and ended up here. 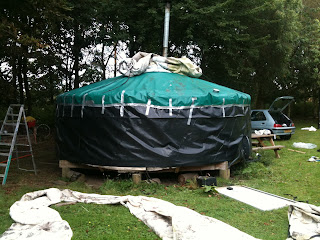 I know what you're thinking, "what about condensation?", I look at it this way, I reckon the weather creates more incoming moisture than I create outgoing moisture.  I'm planning on a mushroom vent for the crown cover soon, so it won't be a problem wither way.  There's a solar powered fan at the door pumping air in all day.