Good news from the chap who runs the company that made my yurt, a bit of camel hide stretch shouldn't wreck things too much, I'll just shore up the numbers with leather laces or paracord and hopefully it'll all be fine. I'm intending to cover the inside of the walls to some extent, being a veggie, the idea of what is basically camel bacon holding my walls together is a bit icky. Also out of the window is the idea of a side exit fire, Tim (who knows his yurts) says that it's not a good idea in the long run and can lead to cold spots around the yurt. Looking at it logically, I have to agree. The fire will go in the middle and the crown will be adapted to offer ventilation, a flue AND weather proofing at the same time. I was thinking that 12v PC fans mounted into the perspex windows and running off the solar panel would do the job of constantly moving air though the yurt, even on overcast days, the draw on PC fans is minimal. In addition to that, it may have a mega-turbo extractor (12v) taken from an old ambulance to evacuate wood smoke and chilli smoke.
Might set up a dry run this weekend with all 4 khana and the door, just to get an approximate circle size before we take the router to the wooden base. It's all very exciting!
Posted by Zanx at 11:06 No comments: 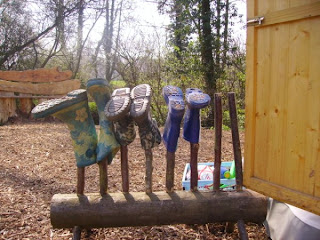 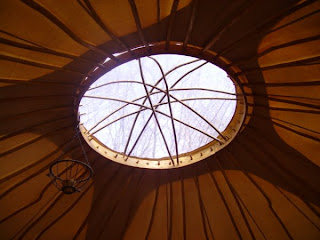 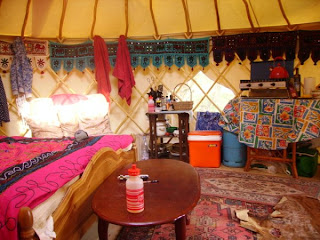 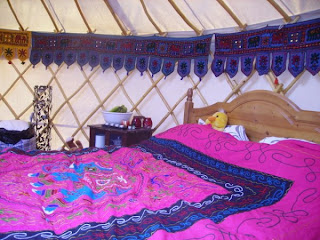 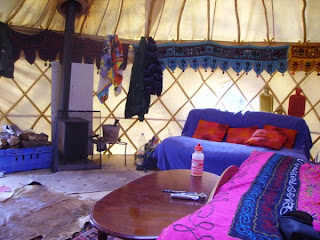 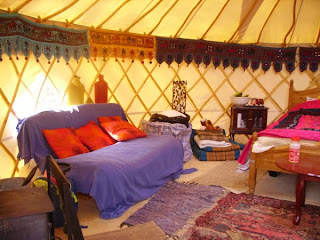 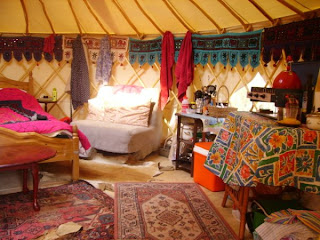 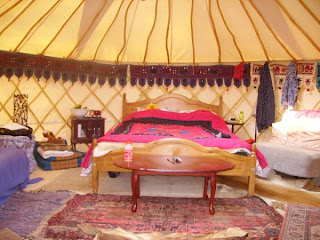 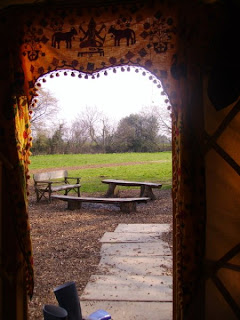 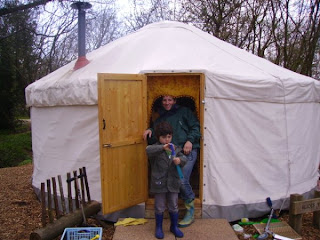 One of the girls at work has been kind enough to forward me some photos of her Easter yurt holiday with www.wowo.co.uk. The yurt shown is the Alice Yurt (no felt lining, hence reports of cold noses in the night) but it looks lovely nonetheless. I am particularly taken by the boot racks and the wood burner off to one side, freeing up LOADS of interior space.
Posted by Zanx at 14:56 No comments: 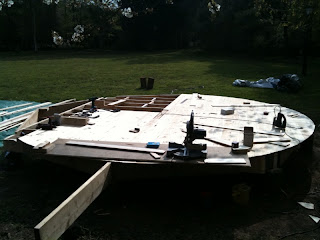 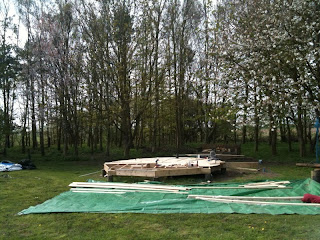 Dave has been slogging away while I plant runner beans and glue the windows into my yurt crown. The decision to buy cheap floor boards is one that will bug me for some time to come. The boards to the front and rear of the base are solid, the ones to either side have very little support and will need shoring up and strengthening. I'll take some pics when the supports are done.

The khana walls came out of storage today, unfortunately, I had them stored on their sides and not upright, this resulted in some of the camel hide strips holding the lattice batons together stretching and popping their knots off. I'm hoping that stretched strips doesn't mess things up too muich when it comes to putting the walls up. for the record, they SHOULD be stored up against a wall, with the bend facing inwards to the wall. The camel hide strips are also succeptible to some kind of mad camel pinhead mould if kept in damp conditions (like the back of my truck). No damage was done by the mould though, time will tell if my stupidity in the incorrect storage of the walls has done any damage. I'll email Tim (Yurtsdirect) and seek his advice.
Posted by Zanx at 08:01 No comments:

Just a short vid of the base so far, a quick walk around showing the construction and the beautiful location. 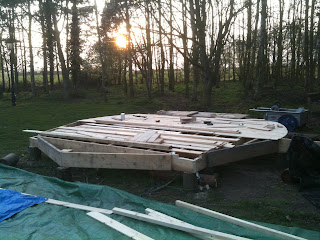 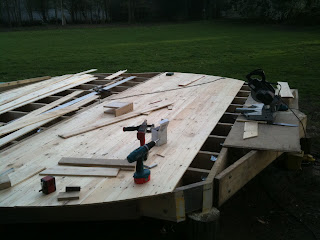 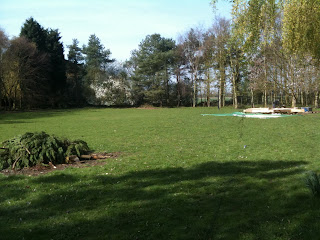 Getting there with the floor. With hindsight, maybe I should have spent more on proper floorboards instead of buying 10mm pine cladding. Still, they are going on reasonably well and Dave (my woodworker chum) is doing a sterling job of working with wood that is warped on more than one plane in some cases. The floorboards have been in the back of s truck over winter, I dare say that didn't help much.
Anyway, more pics.
Posted by Zanx at 12:09 No comments: 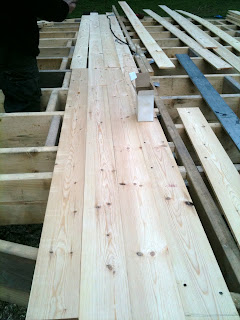 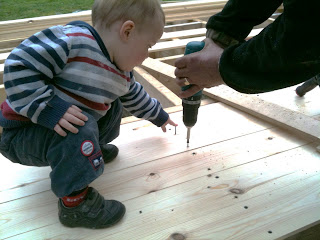 This is the foreman keeping everyone on their toes (just pointing out which screw has to go in next)
Posted by Zanx at 13:01 No comments: 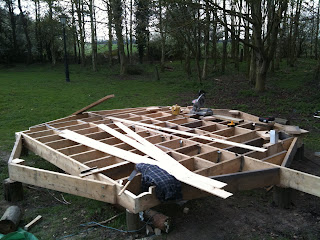 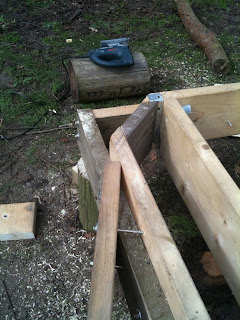 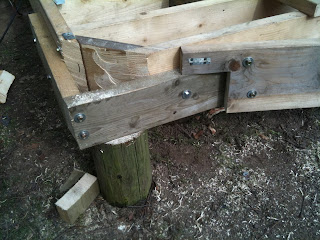 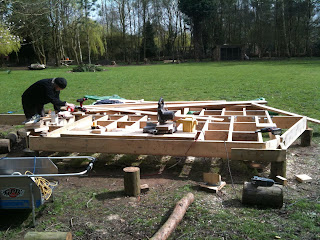 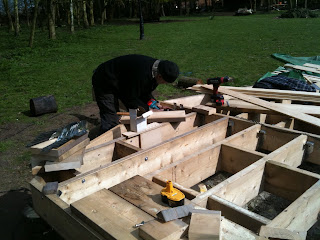 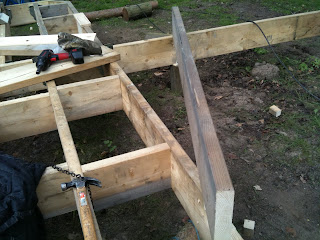 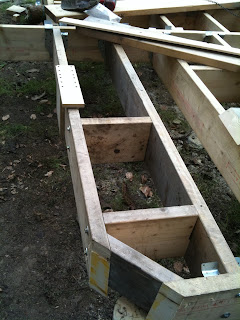 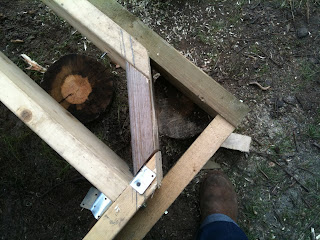 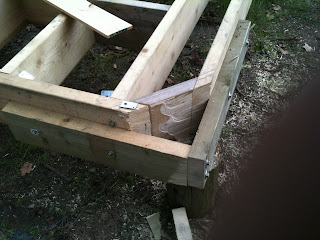 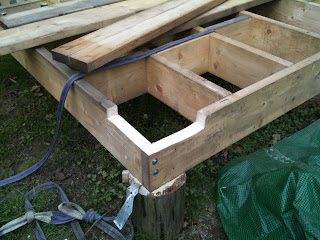 More pics. Got the outriggers done today and just put in the first floorboard. The problem of the base being too big in the corners has been overcome by dint of some creative engineering and BFO turbo bolts.
Posted by Zanx at 09:02 No comments: 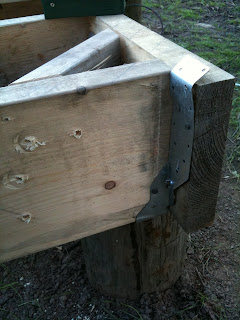 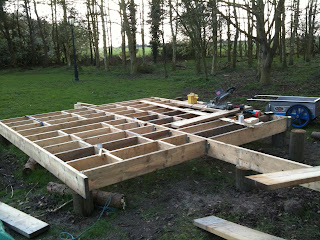 Finally, some decent weather meant the tarp came off and we could start again. All is not well, however, after finding the centre of the main joist and connecting an 8ft string (well chain actually) is turns out that the overall size of the current base is larger than the flooring will be. This is a problem because the yurt's waterproof layer is meant to drop over the edge of the floor to stop rain entering. It's causing a slight delay because we are having to cut the corners off the base, corners which are essential to the stability of the yurt because they are sitting on posts, and put in cross members to rest on the posts.
Posted by Zanx at 11:16 No comments:

Friend of mine at work gave me this a while back, it's a short article on Will Renner's battle to stay in his yurt, quite rightly, he won. 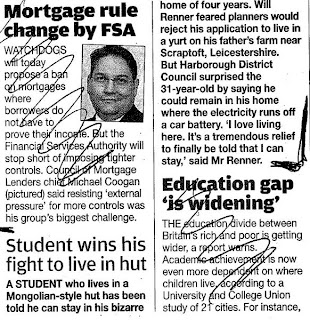 It's covered in detail here too (BBC link) http://news.bbc.co.uk/1/hi/england/leicestershire/8317435.stm

I intend to look into the legalities of yurt living and post up info here. Personally I think councils should actively encourage low impact living, maybe the best for of defence, is attack.
Posted by Zanx at 02:16 No comments: