After stumbling onto this site, I saw that the author mentioned thermos flasks (or "flarks" as they are called in North London) and their use in Mongolian yurts, thinking about it, it makes perfect sense really, rather than boil a bit of water every time someone pops in for tea and something make from horse milk, you boil a batch in the morning and store it, ready for use, in the flask. Maybe we have become so used to instant hot water all the time, that we fail to see the common sense in simpler solutions. anyone who has boiled water on a woodburner will appreciate the massive amount of energy needed to boil just one litre of water.
Anyhoo, this is my chosen flask, the Thermos Venice... 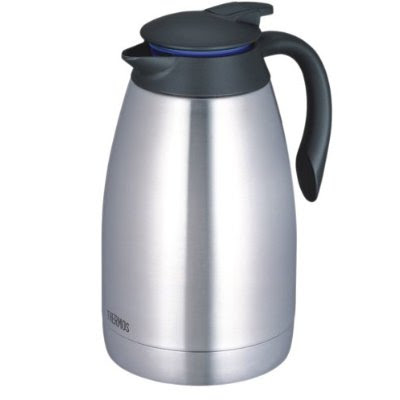 Obviously I filled it with boiling water immediately (after pre heating first) to see how it did. The answer is pretty damned good, it was filled with boiling water at 3pm, I dropped the thermopile into it at 10:30pm and it showed 76c, highly respectable, and that was after pulling enough water for 2 mugs of coffee from it. I'll do another temp check in the morning to see how it's doing.

10am and it's managed to hold 56c, that's about the same temperature as a cuppa that's been left for 15 minutes. Add in the chill factor of the mug, 56c isn't really enough unless I use plastic mugs from now on. Either way, 17 hours later and still steaming is very respectable.
Posted by Zanx at 15:13 No comments: 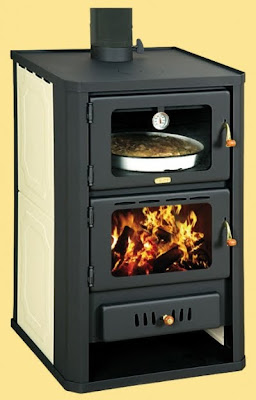 After much faffing and research, I decided to buy a Prity FG W15 with boiler and stove for £500. Here's a picture.

It doesn't seem to have the kind of burn control features that some of the more expensive, non oven, types of stoves have, but then again, you can't do jacket spuds or pizza on them unless you splash out £1800 on a Clearview (and that's simply not going to happen). Anyway, the Prity has a dial, and I'm a bloke, blokes are suckers for dials. End of.

Hopefully the weather at the weekend will hold out, the crown cover will need removing to open up the silicon flue seal a bit to accomodate the 1" bigger pipe and some jiggery pokery will need to take place to get the stove in a nice position, the Mongol stove flue exits on the right rear corner, conveniently exiting though one of the gaps in the crown, this stove exits in the middle, so it will need a couple of bends put in to get the flue leaving the yurt in the right place while at the same time, placing the stove right in front of the comfy chair so I can watch bread cook.

Hopefully arriving Friday, yaay!
Posted by Zanx at 03:01 No comments:

The Hunt for a New Stove

Don't get me wrong, there is nothing wrong at all with the stove supplied (free I may add) with my yurt, that is assuming that it's -40c outside. It fires up instantly, has a great draw and chucks out more heat than a nuclear reactor, therein lies the rub, it's too hot, too soon, too fast. I'm on the lookout for something more controllable, something that will tick over though the night and prevent the hilarious problem of dead arms, a phenomenon whereby you subconsciously put your arms outside of the duvet while it's warm, then fall asleep in the ever diminishing warmth, only to discover the next morning that both your arms are freezing cold and have no feeling in them for the first 10 minutes of the day, essentially leaving you with the feeling of having 2 damp baguettes hanging from your shoulders.
Ideally, the new stove should have some sort of pizza or jacket potato making facility, contenders for this are:

Windy Smithy Louis or Ranger
Clearview Pioneer
Something from Prity

Admittedly, the Prity does tick all the boxes, and then some, but is 2mm steel going to hack it in the long run? Biggest concern here is build quality.

The Windy Smithy, while undoubtedly well made by all accounts, is quite pricey (well it's not Chinese so it's bound to be) but I'd like to know if the little fire box can actually put out enough heat over a long enough period of time to cook my spuds.

I have to admit that option paralysis appears to be setting in.
Posted by Zanx at 03:23 No comments:

Finally, we have a yurt in it's rightful place.

Well, after the veritable disaster of realising that we had built the base too small for the yurt (my fault) and after putting extensions and reinforcements on to the base to accomodate the sudden dawning of the laws of scale, we have success, the yurt is up!!!

It seems much harder to dress a raised yurt than one that is at ground level, the felt layers were particularly pesky, but it's all up and once the fire is blazing away, it's easily the cosiest place I've ever been. The woodburner that was included with the yurt is rough and ready (hardly surprising given the lack of TIG welders in Mongolia) but is ferociously efficient. a handful of broken pallet and a few pine cones to get things going will bring the temperature from 15c to 30c in 15 mins, and will keep the inside cosy warm for a good three hours. Hardly surprising when you consider that none of the covers are particularly good conductors of heat and that each one has a layer of air next to it.

Weatherproofing the bottom of the door has been tricky, but was finally sorted by using a baton of wood and some thick PVC sheet/silicone, to create a slope away from the door.

The steps up to the door are just half round posts hammered into the ground with what appears to be reclaimed hardwood for the platform, the first step is made from a couple of bits of telegraph pole that were left over from making the base and a lovely lump of wood left over from the joist we chopped up to reinforce the base extension. It's solid as a rock and really adds to the vibe of the yurt, it's somewhere to sit and just watch the rabbits or listen to the owls (you can hear them from inside too). It's real quality time, a couple of storm lamps for light, a lovely warm fire and good company, you can't beat it. 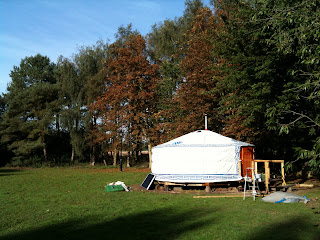 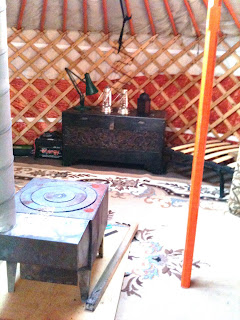 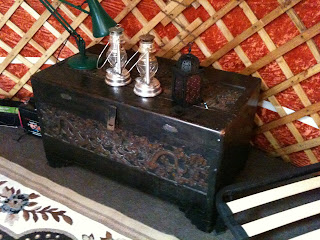 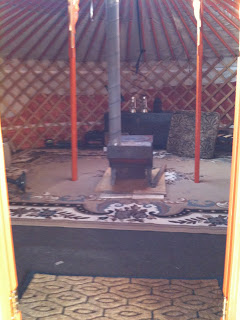 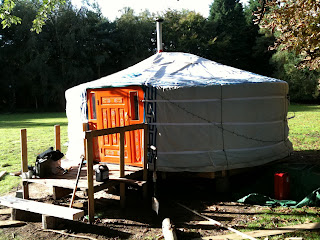 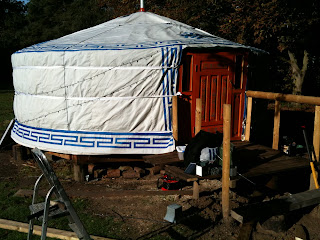 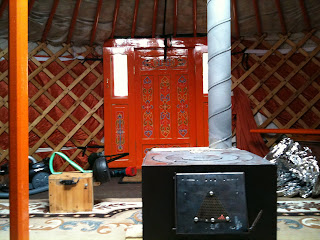 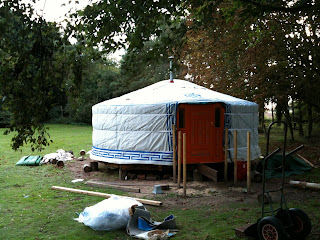 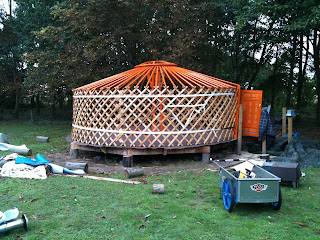